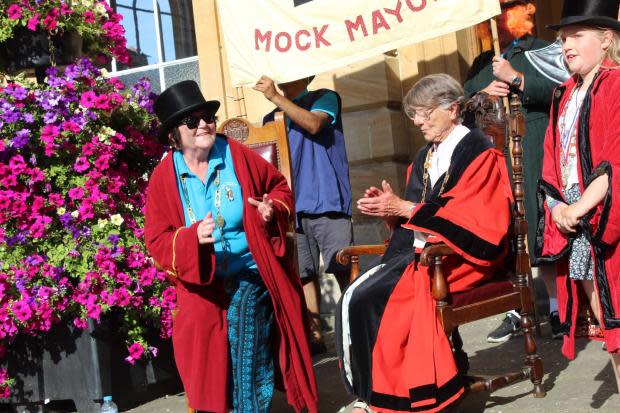 Woodstock’s ‘fictional mayor’ festivities are back… with a dip

THE ‘FAKE MAYOR’ of Old Woodstock turned his back on the red-robed, civic-shackled mayor of the ‘new’ town – before walking down the hill to get a dip in the River Glyme.

Saturday saw the return of the 230-year-old Woodstock tradition.

Under scorching skies, Karen Jones, 64, was elected the ‘fake mayor’ of Old Woodstock on a manifesto promise to unite the two parts of the town.

She then led the procession from the Black Prince pub, through Blenheim Palace grounds and to ‘New’ Woodstock town hall.

It was there that she met the town’s mayor, Cllr Dr Elizabeth Poskitt, and danced to the percussion of Soul Samba before officially turning her back on the council official and heading back down the hill.

A watery welcome would greet her deep down. After being elected to office, the fake mayors are ceremoniously ducked into the River Glyme.

“I knew this was coming,” Ms Jones said of her soaking.

She said it was “fantastic” to be elected. The Woodstock resident of 14 years added: “My speech was about unity in the community. I think it’s time to bring the community together. There is strength in numbers. »

The fictional mayoral event dates back to at least the 18th century and has its origins in the rivalry between the two colonies, with Old Woodstock predating its royally established neighbor by less than 100 years. A ‘dummy’ golden mace head dated 1786 is the earliest record of the ceremony.

The rowdy ritual, which involved a procession around New Woodstock and the dipping of the “fake” mayor, stopped in the 1920s, was briefly revived in the 1950s, then returned in earnest later in the century.

Cllr Poskitt, the current mayor of Woodstock, said: ‘It’s a fun day and a time for old Woodstockians to say what they really think of the town.

As part of the festivities, the mayors organize a mock court – calling witnesses and handing out punishments. The one-day event also featured a tussle between Old and New Woodstock, a duck race, coin toss and music.

This year the event was expected to raise thousands of pounds to benefit three charities: Woodstock Seniors Lunch Club, the Woodstock Stroke Club and Silver Star, which is part of the Oxford Hospitals Charity and funds maternity care equipment.

This story was written by Tom Seaward. He joined the team in 2021 as a forensic and crime reporter from Oxfordshire.