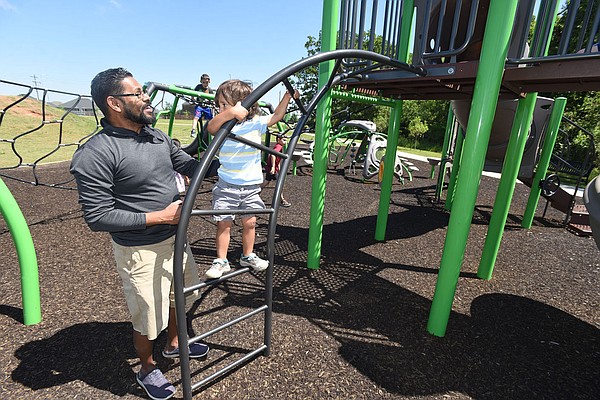 On Friday morning, a few people were walking on the trails of the 120-acre park, which opened a year ago. A few children played in the playground and dogs swam in the ponds.

Chad Wolf, director of the city’s parks and recreation department, expects more people at the park as schools close for summer vacation.

“Especially around the paddling pool in hot weather,” he said.

People just don’t know about the park, said Vernon Tarver, director of marketing and special events for the parks department. Most residents are focused on the renewed downtown with restaurants, art and trails, he thinks.

“Right now, everything new and hot is downtown,” he said.

Brock Chaffin of Tontitown said Friday he wanted to keep the park a secret. He brings the dogs Rueben and Rae to the park twice a day.

“I just let them run around in open fields,” Chaffin said of his dogs. “It’s so uncrowded in the morning. They like to hunt critters – birds and squirrels.”

And Rae was wet from swimming in the pond.

When it’s hot in the summer, Rueben will just lie in the paddling pool, Chaffin said.

“It will take some time for people to get to know the park,” Tarver said. “He has a lot to offer, even without ball fields.”

Four adult softball fields in the southeast corner of the park were part of the original plan. Shaw Family Park was built with $10 million from the city’s 2018 bond program.

Shortly after Springdale voters approved the bond issue, the city was given the opportunity to purchase the building that now houses the city’s recreation center, using $2.2 million from the l bond money.

Prices for Shaw and other projects also came back higher than expected, Mayor Doug Sprouse said. The city therefore delayed the construction of the ball diamonds.

Springdale baseball fielded 80 teams this year on 20 fields. The fields are also used by women’s and adult softball teams, he said.

The board will review ball diamonds and improvements to other parks for the next bond issue in late 2023, Wolf said.

The city built Shaw Family Park with $10 million from the bond issue. The park was built on land purchased with money from the 2012 bond program.

Sprouse said the city built the park in the northwest part of the city because leaders expected development there.

“Many roofs have been added since construction of the park began,” he said.

Shaw Park was in the plan to build Cottages at the Park immediately east of the park — and the neighborhood is very popular, Sprouse said. The subdivision includes its own access road to the park, so residents can easily access park amenities.

In 2021, the city council added $135,000 to the parks department budget to hire three maintenance workers for the park and three temporary workers during the summer season to mow, weed, clean bathrooms and more. The council also approved about $121,000 from the city’s capital fund to purchase equipment like mowers, weed trimmers, all-terrain vehicles and a pickup truck.

Katie Bellamy of Cave Springs read aloud the features of the park to her children. “There is a paddling pool, a playground and toilets,” she explained. “Looks like there’s some really fun stuff.”

Friday was the young family’s first day at the park, Katie Bellamy said. She googled it and saw it was near their home.

She said the bike lanes caught her attention because 3-year-old Brooks Bellamy likes to ride a bike. Mum said she loved the wide, paved trails – and with a shout, Brooks took off on her bike to greet a friend.

Elsie Bellamy, 1, spent her time at the park in a swing.

Teresa Fogerty of Corinth, Miss., also found the park on Google and visited it for the first time on Friday. She is in northwest Arkansas to visit her daughters in Lowell and Huntsville, she said.

Fogerty brought his dogs Peanut and Roxie to play in the dog park.

“They really enjoyed it,” she said.

Tarver said the parks department is trying to direct people to the park for its other amenities.

“On a nice day at the weekend, there are a lot of people in the pavilion for birthday parties,” he said.

Other groups have planned 3 and 5 kilometer races in the park.

School groups have also started using the park, bringing busloads of students. But, because the park is large, it doesn’t seem crowded, Tarver said.

Shaw is the second largest park in the city. JB Hunt Park is the largest at 160 acres. Randal Tyson Recreation Complex and CL “Charlie” and Willie George Park both have approximately 80 acres.

The department also plans free events at the park.

Representatives from the Arkansas Game and Fish Commission will host a family fun day on Saturday. They will fill the pond and serve barbecue, Tarver said.

Shaw Family Park in northwest Springdale, seen Friday, May 27, 2022, has been open for a year. (NWA Democrat-Gazette/Flip Putthoff)