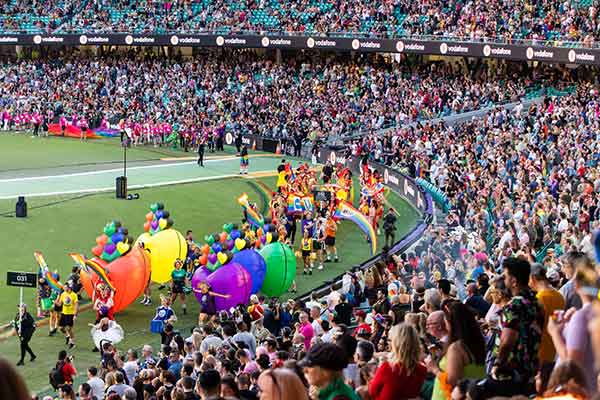 The Sydney Gay And Lesbian Mardi Gras Parade, Australia’s biggest LGBTQIA+ celebration, is just days away, and many in Sydney (and around the country) are putting the finishing touches on their plans (and outfits!) sorted .

Of course, there will be many people who will not be able to come this year. Luckily, for those unable to attend the event in person, triple j will bring it to the ears of audiences nationwide.

Tyrone Pynor (versatile creative and host of Weekend Lunch and the RnB soul show ctrl) and Abby Butler (unearthed triple j music connoisseur and popular Tik Tok-er) will be in the hosting seats for the triple j broadcast of the Parade, so why not find out a bit more about them before the big day?

We spoke with these proud members of the rainbow community about what Mardi Gras season means to them, their passion for radio and what they want to do to bring the parade festivities to life across the country.

First of all, what are you looking forward to most from the Mardi Gras Parade broadcast this year?
Tyrone: Well, there are a lot of them, but I’m very happy to be able to bring the Parade to areas that might not be able to get the best access; rural communities where they might want to be part of the glitz, glamor and music, but might not be able to or ready to do so just yet.
Abby: For some LGBTQIA+ people, it’s been years since we’ve been able to be surrounded by community. For others, months of isolation might have led to a bit of soul-searching that might have led to queer self-discovery and might for the first time experience the joy of this community. All that?! Together?! Same night?! Magic!

And what can listeners expect from your airtime throughout the event?
Tyrone: Great GAY party atmosphere. Hosts to music! We want to paint the picture of what the show looks like for you to view through the radio, down to the color of Vanessa Amorosi’s eyeshadow! We are going on a great strange sound journey!
Abby: Imagine a big party over the airwaves to which everyone is invited. It’s gonna be chaos. Latifa is on the decks playing all the songs you’d expect at a Mardi Gras party, and Tyrone and I are going to make you feel like you’re sitting right next to us at the Parade. Plus, you’ll hear from some very familiar and very special guests!

Tyrone, what’s your favorite thing about Mardi Gras season?
The amount of unwavering love and pride displayed by the community and allies outside of the community!

How about you Abby?
When I moved to Sydney in 2017, I was still very locked in and figuring out who I was. That year I went to Mardi Gras for the first time, and it was a huge catalyst for me to actively decide to embrace my homosexuality. Seeing LGBTQIA+ people so joyful and free and surrounded by love and community was so important to me and so my goal is to bring that magic to the airwaves.

Tyrone, what brought you to present on the radio and what excites you?
I grew up listening to music, it helped me a lot to grow. I was that kid who would be in class with the headphones woven into the sleeves of his hoodie listening to music. It’s a dream that I can now talk about and listen to music for work, but also very special that as a queer man of color I hold this space for the different communities that I find myself a part of.

Abby, you work for Unearthed – what drew you to this triple j platform?
I’ve always loved discovering an artist when they’ve released a track or two and following their journey over the years. I get to do it every day at triple j Unearthed, connect with artists across the country, and serve it to our very passionate community of music lovers.

Abby, you have quite a few followers on TikTok. How do you stay inspired to continue creating content on the platform?
Sometimes I think I’m in my flop era after posting a few failed videos in a row and then a bad “Euphoria” shot or local artist recommendation from me will really connect with people, and it will take off. Converting a random stranger halfway around the world into a fan of a new Aussie artist is always the best feeling.

Tyrone, you are somewhat of an all-round creative – aside from radio and music, what medium of expression would you be most likely to seek out and why?
I have been doing photography and video for years. I haven’t picked up my camera in a hot minute, but I’m getting there. I love the element of being able to bring a story to life, whether it’s a photo that says a thousand words or a movie clip, there’s something special about it. Watch this place.

Who are some of each of your favorite queer artists right now?
Tyrone: I never get tired of Kaytranada, her new EP has been on repeat for me. Mo’ju is a VERY special talent on the Australian scene at the moment, they are testing the boundary with their sound, fusing the influence of their Filipino culture and Wiradjuri lineage. Their latest album ‘OK’ contains some real special moments (they will be performing at the parade). Someone who has constantly smothered me with his music is Joesef – a Scottish singer based in the UK, I have his new stuff on repeat too.
Abby: Jamaica Moana and Jesswar are two absolute powerhouses of Australian hip-hop. Both bring such uncompromising energy to their music that it’s impossible not to be a fan. Internationally, I was obsessed with an American artist named Chappell Roan. His new “Naked In Manhattan” perfectly captures how fun and magical it is to be queer.

What message would you like to send to Australia’s LGBTQIA+ community this Mardi Gras season?
Tyrone: Whether it’s your first or your 100th birthday, step into this time with strength, power and love, take care of yourself and if you use glitter make sure it’s biodegradable.
Abby: The best thing about being part of the LGBTQIA+ community is that there’s always a community to lean on, even when you can’t feel it or see it. It’s still there. Even without a global pandemic, homosexuality can sometimes be isolating, but there are so many people who are in your corner and ready to embrace you.