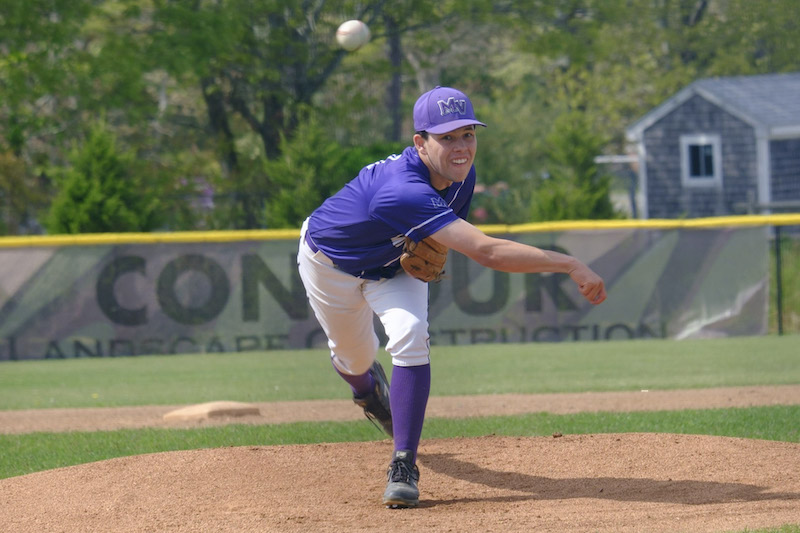 The Vineyard boys’ baseball team sweated a bit as they eliminated Sturgis Charter School West 6-0 at the Sharks baseball field on Thursday.

The game started defensively, scoreless in the first two innings. Then, late in the third inning, senior Atlas Zack took a walk from Sturgis and managed to steal second and third base. A sacrifice in right field put the Vineyard on the board 1-0.

The team never looked back, continuing to rack up runs as Nico Arroyo held Sturgis scoreless at home plate.

The team wraps up the regular season Saturday with an away game against Nantucket, then it’s on to the playoffs.

“We just have to keep playing as a team and doing the little things right and keep working like we say,” coach Crossland said after the game.

“We’re out there every day doing the job,” Cranston said. “We had a game on Saturday, it’s our last regular season game, so hopefully it goes well, and we carry that energy into the playoffs. It’s the best team I’ve played for, the best people and the most talented kids I’ve played with. I think we could go all the way, honestly.

Prior to the match, the team celebrated its seniors with a ceremony which included parents accompanying their players onto the pitch.

Coach Kyle Crossland congratulated the graduating seniors and told the crowd where each player was heading after graduation.

The seniors and their parents were honored before the game. — Mark Alan Lovewell

The team is now awaiting the playoff schedule and the announcement of its first opponent.