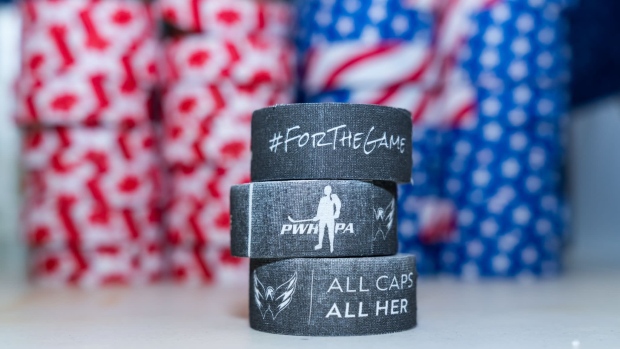 Baylee Wellhausen of Team Adidas (Minnesota) scored twice in regulation time, adding another scorer to the shootout, in a 4-3 win over Team Bauer (Boston) on Sunday afternoon.

It was a great response for Team Adidas after conceding six straight goals in a loss to Team Scotianbank (Calgary) in the semi-finals on Saturday.

Team Bauer ends the tournament losing two games by one goal, including the first against Team Sonnet (Toronto) on Friday, who will face Team Scotiabank in Sunday’s final at 1:30 p.m. ET.

After Wellhausen put Team Adidas on the board in the shootout, Mellissa Channell slipped a shot past Terra Lanteigne to score the winner, sealed by Sydney Scobee closing the door at the other end.

The winner of Sunday’s final between Team Sonnet and Team Scotiabank will take home the fourth prize of the weekend of this PWHPA season, after showcases in Toronto, Truro, N.S. and Ottawa. Team Sonnet qualified for the final with a 4-3 victory over Team Bauer in the semi-finals on Friday, while Team Scotiabank earned a berth by beating Team Adidas 6- 2 Saturday.

The event marks the sixth time the PWHPA has partnered with an NHL team for a Dream Gap Tour showcase in the past two seasons, after partnering with the Toronto Maple Leafs, Calgary Flames, Rangers New York, the St. Louis Blues and Chicago.

The Capitals and PWHPA will also feature three clinics for local players, with instruction from PWHPA athletes and coaches, as well as Capitals youth hockey development staff in on-ice and off-ice sessions.

The team @adidashockey made the link halfway through 3!