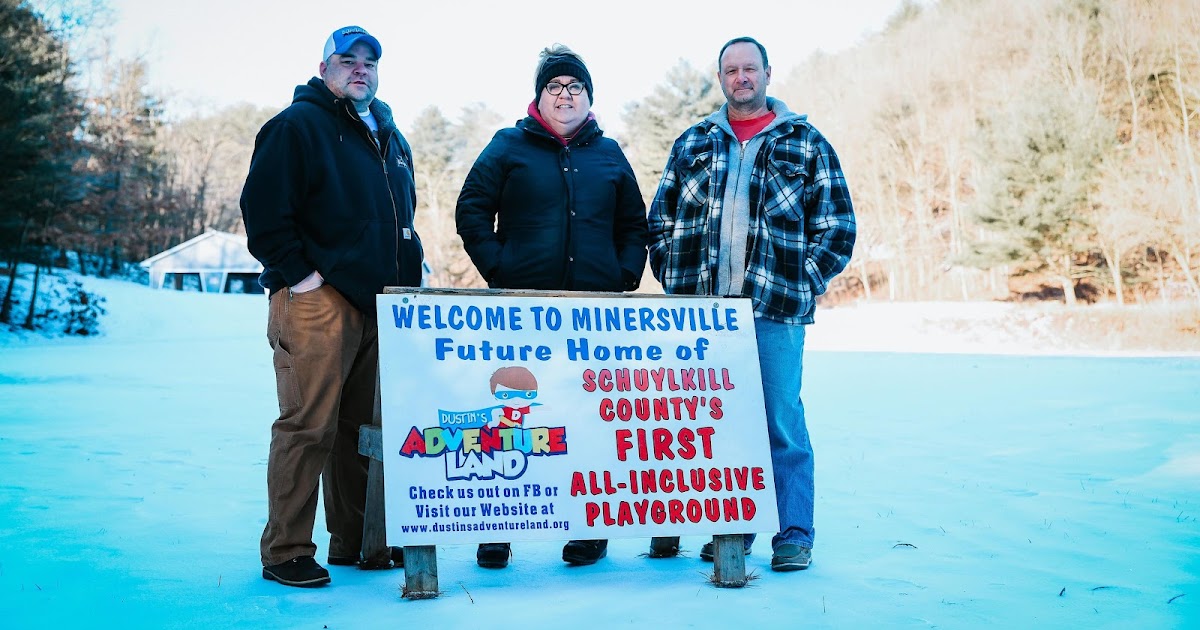 “Our organization started a few years ago as a fundraiser for special needs. Amy Freed, Dustin’s mother, posted an article looking for ideas for hosting a special needs egg hunt after attending another egg hunt that was unable to accommodate children with special needs. I was tagged in a post, we started communicating and came up with the idea of ​​selling raffle tickets for it. We ended up raising a considerable amount of money for this, and we organized the egg hunt, which turned out to be quite large (118 children). The State Police offered beeper eggs for visually impaired children, we had a wheelchair section, 15 costumed characters came, and an egg dye station, etc. We ended up having leftover money, we were trying to decide what to do with the money (either donate it or start a non-profit to hold it). We thought of putting up a locally installed swing set with a plaque honoring Dustin’s name. I then met up with Jim Womer and asked him if he would be willing to set up the swing set for us, which he was all for. He told me he always wanted to start a handicap play area somewhere in Schuylkill County, he’s been doing it for over 20 years and it was one of his goals. It was pure luck that we met that night. About an hour later he came out and said to hell with the swing set, we’re going to set up a whole playground. It was in July 2019.
The first thing we needed was land, so we reached out and found someone who had a few plots to choose from. Then we went to meet with the Borough of Minersville, and we ended up signing a 20-year lease for the place where it’s going to be built. We also have 8 acres which are donated by a private entity which borders this space for future expansion.
There have been many hurdles, COVID being the main one with the cancellation of many fundraisers. The ability at that time for businesses and individuals to donate was difficult. Physical barriers were also an issue – leases, property lines, numerous meetings, etc. A recent was the ramp to the recreation complex that we thought we could use is not ADA compliant from now on we are going to have to reconfigure the whole thing. So now what we’re doing is revitalizing the one parking lot and creating a new ramp. It was an extra 30-40k that we weren’t expecting. It’s the biggest one, but we’ve always found a way to overcome those obstacles.
Aggressively we mean April 2022 we want to start construction. It depends on funding, weather conditions, etc. They do everything for free at cost to reduce the overall cost.
We’re getting closer to our overall goal, so hopefully people will keep us in their thoughts as we get closer and closer. We are also always looking for volunteers for our events, it’s huge and always needed. Everything is family. We are also accepting donations for blocks and puzzle pieces that will be on the playground once built. Puzzle pieces are a great opportunity for businesses to advertise as they will be around the playground.
The Easter Egg Hunt had to be canceled last year and this year for health and safety reasons, but the Skook Easter Bunny Tour is still ongoing and we plan to reach over 12 municipalities.
We are $47,500 away from our goal of fully funding the project and a big part of that thanks not only goes to our Board of Directors, but also to the community who always make our events a success.

The organization will host a gun raffle in May and a golf tournament in August, and hope to return Wings Night to local Amvets in Pottsville.

Ukraine beefs up cyber defense in anticipation of Russian attack