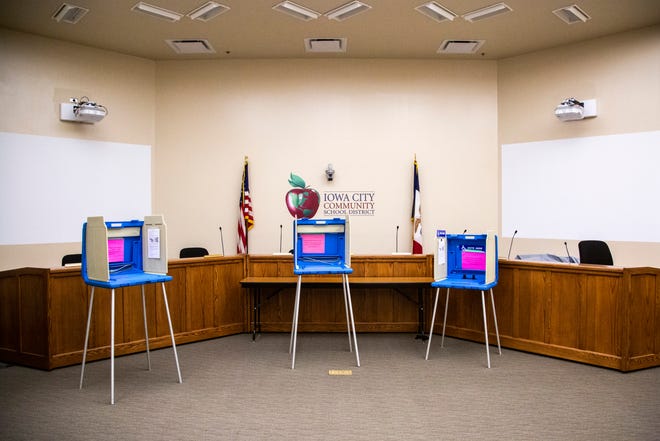 “No new taxes” is the main message from the Iowa City Community School District regarding two facility-related issues on the ballot next week.

That’s right: voting ‘yes’ on both questions would keep the tax rates as they are for two particular sources of school funding. But the details behind both scrambled blocks of text on voter ballots, which have implications for decades for district finances, are both important to understand before you vote and, well, confusing.

In summary, a “yes” to the first ballot question would allow the ICCSD to continue to collect $ 1.34 per $ 1,000 of assessed property value for the Pysical Plant and Equipment Levy (PPEL), or a property tax bucket that the district uses primarily to cover facility costs, until 2035.

Voting “yes” to the second question gives the ICCSD the power to use the sales tax money it receives from the state, which is part of the “Secure an Advanced Vision for Education” fund (SAVE ), to pay for facilities, technology, security and other costs until 2051. The state allocates SAVE dollars annually to the district; if voters say “no”, the money will have to be spent on other debt relief.

What is the tax on physical installations and equipment?

Think of PPEL as one of the many bank accounts owned by the Iowa City School District. The account balance increases when people who own property within neighborhood boundaries pay taxes at a rate specific to the PPEL. ICCSD is the account holder, but is only allowed to spend the money on certain things.

The district will accumulate approximately $ 12.5 million in PPEL funds this year. Generally, the money is used to pay for installations, construction and major equipment purchases.

ICCSD collects $ 1.67 per $ 1,000 of property value for PPEL. The rate is divided into two parts: a maximum of 33 cents approved by the school board and another maximum of $ 1.34 with the approval of the voters.

The PPEL last voted in Iowa City in 2013. Then the rate of $ 1.34 was passed with 74%, extending it until June 2025. Voters approved an identical rate in 2004 with 79% votes, although only 4% of registered voters participated in the countywide elections.

(Note: PPEL is one of many “levies” or metaphorical bank accounts owned by the ICCSD, with a balance that increases when people pay taxes on the basis of fixed rates. Other levies fund “accounts.” to pay other district costs.)

What is the secure and advanced vision for education?

Think of SAVE as a check that schools in Iowa City receive in the mail from a family member every year. If ICCSD wants to spend the money on certain things – facilities, technology, and security, in this case – the family member wants them to get permission from their parents first.

This metaphorical check is made up of money collected at the state level through a sales tax of one penny. The family member has lots of other parents to support – so they decide it is fairer to give larger sums of money to parents with the most bills to pay.

Last year, the ICCSD estimated it would receive $ 15 million from SAVE. The state government plans to continue collecting and distributing SAVE dollars until 2051. The dollar amounts change slightly each year.

What is on the November 2 ballot is the ICCSD plan for how to spend that money until 2051. The spending plan is outlined in a “Statement of Income Goal” , which is also the language on voters’ ballots.

According to the revenue goal statement, schools in Iowa City would use SAVE funds to pay for: “information technology infrastructure,” school safety and security infrastructure, construction and furnishings. new schools; remodeling, repairing, enlarging and improving buildings; purchase of a new property, demolition work; the purchase, rental, repair of transportation and leisure equipment; energy saving work, playground fees, reimbursement of general obligations and Following.

Voting needs 50% approval to pass. If not, ICCSD still receives the money – but there are rules about how it can be used. defined by state law. The list of approved costs is long, but includes the repayment of bond debts or the reduction of other taxes.

The last time SAVE was on the ballot for Iowa City was in 2013. Then, voters approved a ballot measure with 56% of the vote, allowing the district to spend money on similar types of costs until 2026.

Are there more details on how the money is used?

PPEL and SAVE are both sources of funding that the district relies on to pay for “life cycle” expenses, or the maintenance and upkeep of district facilities.

This year’s budget shows that the district will spend the majority of PPEL funds on life cycle projects. For example, the district was budgeting $ 500,000 for plumbing, $ 750,000 for roofing and $ 300,000 for flooring, among a list of other projects.

Other examples of PPEL spending include climate action initiatives, such as replacing old heating and cooling systems.

“PPEL funds pay part of our bus transportation costs,” Finger said. “Without the PPEL funds to do this, it has to come back to the general fund, because we have to transport a certain number of children by law. If we are not able to finance this through PPEL, we are going to have to reduce the expenses. available for classrooms in the general fund.

The money would also be used to fund Facilities Master Plan 2.0, or the name of the next round of construction projects that ICCSD aims to roll out over several years.

The PPEL budget for the current year leaves $ 2 million for the purchase of land under FMP 2.0, for example. Part of this process includes borrowing money against future taxes the district might plan to collect – as if you were taking out a mortgage based on the projected salary, except that the “salary” is taxpayer money.

The general bond of $ 191.5 million approved by voters in 2017 served as additional funding for the facilities projects on top of the taxes the ICCSD was already collecting. It has enabled ICCSD to contract loans to finance facility projects under Facilities Master Plan 1.0.

Cleo Krejci covers education for the Iowa City Press-Citizen. You can reach her at ckrejci@press-citizen.com or on Twitter via @_CleoKrejci.