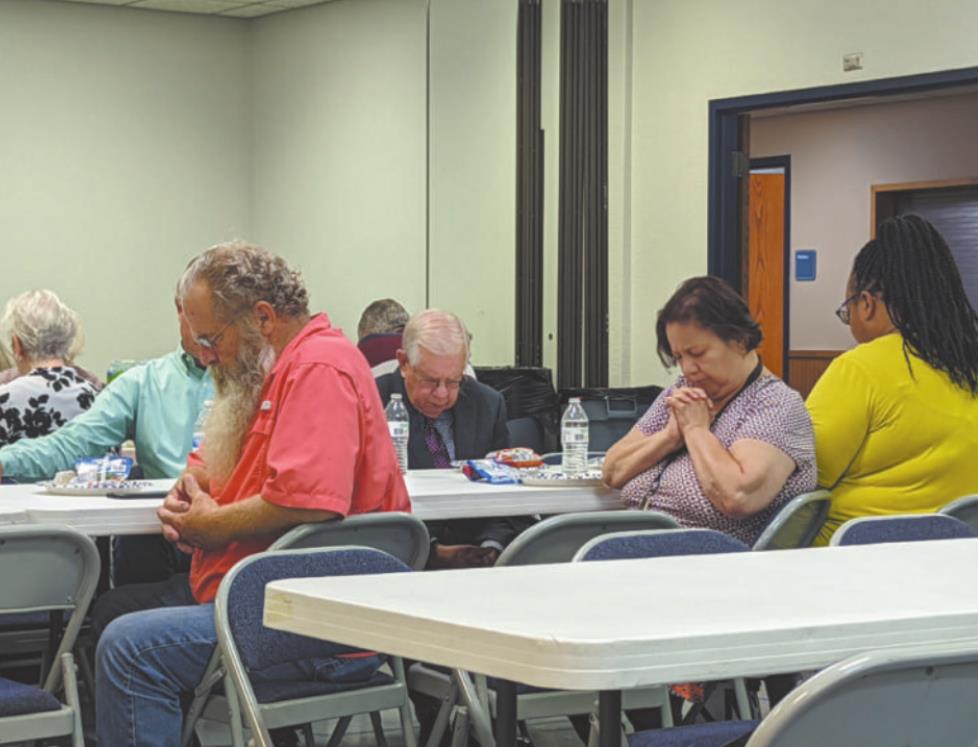 Members of nearly a dozen Denison congregations gathered Thursday in recognition of the National Day of Prayer. The event, which was sponsored by the Denison Ministerial Alliance, brought together churches of different denominations coming together in their common faith to pray for the community.

“No matter what denomination we are, we are all Christians together, praying for our community, our nation,” said Reverend Justin Miller of the United Methodist Church in Waples.

While the days of prayer, fasting and thanksgiving date back to the country’s origins, the modernized version of the National Day of Prayer was created in 1952 by President Harry S. Truman. The day was formalized in the late 80s when it was permanently scheduled on the first Thursday in May each year.

For congregations in Denison, Thursday saw an attempt to return to normalcy after COVID-19 affected the final two days of prayer. Celebrations in 2020 and continued concerns over the pandemic have led to smaller, more congregation-focused festivities in 2021.

Miller said organizers hoped to have a return to Waterloo Lake Park, the event’s traditional venue, this year, but forecasts of rain and bad weather led organizers to move inside Parkside Baptist.

Thursday’s festivities focused on prayer for seven groups, including government, teachers, the military and others. While prayers led by local pastors focused on those areas, Miller said churchgoers likely have plenty to pray for in 2022, he said. Inflation is rising while there is an ongoing war in Ukraine. Meanwhile, the lingering effects of COVID-19.

Yet he encouraged those present to seek guidance and assistance from a higher power.

“The power of prayer is so strong for me in my life, and as a pastor I have seen prayer change the behavior of those who are prayed for,” he said. “There are also changes in our whole outlook and when we pray for someone it changes our outlook and the way we see it and how we deal with it.”

Were going to hold the event at his traditional Lake Waterloo Park home, but eventual storms moved him indoors.

“It’s a national thing where we come together around the world,” Miller said. “It is officially the National Day of Prayer where we pray for seven different areas of our nation, from government to military, media, business, education, church and family. is something that we as Denison and the community have been doing for several years.”

Likewise, he said there is strength in coming together in a common faith. Although there may be differences between different congregations, their common faith is stronger than these differences.

Here at Denison, we’re all about the community and we’re all about it,” he said. “No church is better than another church and we unite as churches, Christians working together.”