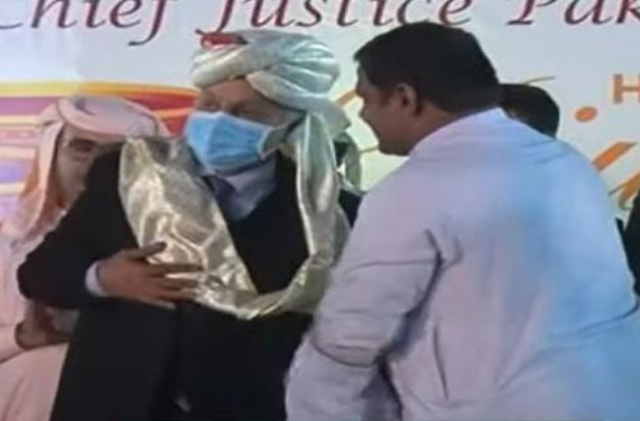 Chief Justice of Pakistan (CJP) Gulzar Ahmed inaugurated the reconstructed Shri Param Hans Ji Maharaj temple in Karak, Khyber-Pakhtunkhwa (KP) on the occasion of Diwali and congratulated the community on this special occasion.

In December of last year, a mob led by a local cleric and others attacked the temple and completely demolished it.

Addressing the inaugural ceremony on Monday, Justice Gulzar said Pakistan’s Supreme Court has always taken steps to protect the rights of minorities and will continue to do so in the future.

He pointed out that according to the Constitution, the Hindu community has the same rights as people of other religions.

The CJP observed that everyone loves their holy places and that no one has the power to harm anyone’s religious place.

He added that the Supreme Court guarantees minorities the protection of their religious freedom and has called the Constitution a duty to protect minorities.

Speaking on the occasion, Pakistan Hindu Council Chief Boss and PTI Head Dr Ramesh Kumar said he was grateful to the Chief Justice for timely knowledge of the Karak incident. .

Maintaining the temples is the primary responsibility of the Evacuee Property Board, he added.

Kumar went on to say that if four more historic temples were reopened in Pakistan, thousands of Hindus could visit them and it would improve the country’s image in the world.

He also announced the holding of a conference to dispel a negative impression built against minorities.

Minorities in the country, he added, are completely free to exercise their basic rights, including education and religious freedom.

The PTI leader urged all segments of society to work together to prevent incidents that could damage the country’s reputation.

Earlier, the community welcomed the Chief Justice on site and presented him with a turban along with a digital Quran and other gifts. He was also briefed on Diwali and the history of the temple.