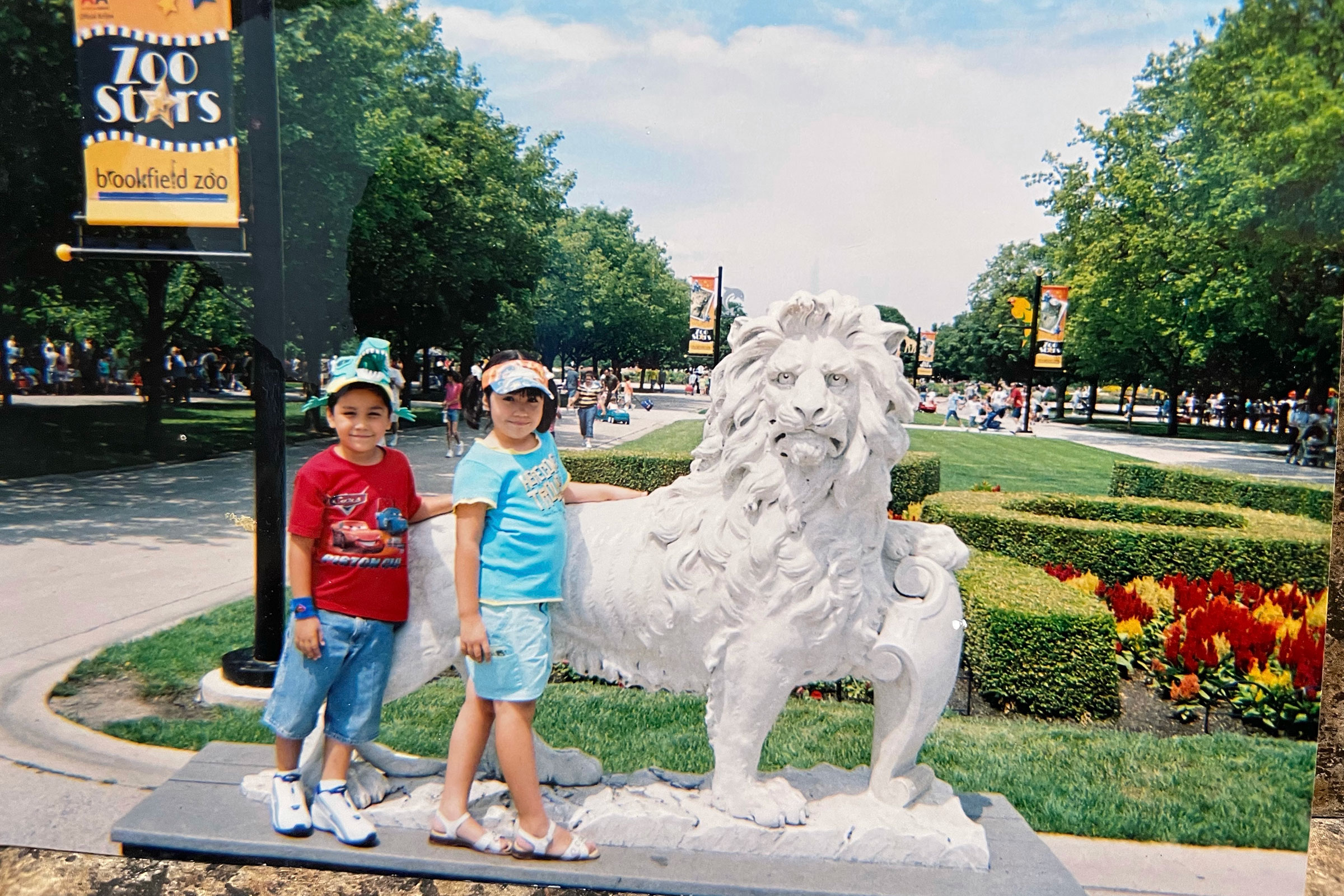 Awareness of my Mexican identity

My siblings and I have been best friends since I can remember. Going to the same schools together, going back and forth between our mothers and fathers and constantly fighting is a strong bond between us. Although the three of us were born over a period of three years, our experiences of identity realization have been very different. Until 2010, we all attended St. Patrick’s Catholic School in Joliet, Illinois. Despite being in an area with a large Latinx population – especially Mexican – my siblings and I were among the only Latinx students in the entire school, administration and staff calling us the Infamous Quintana Trio.

My memories of the predominantly white school are filled with images of my classmates and I, all dressed in white polo shirts and navy pants, or checkered sweaters and skirts, running through the playground, watching. weekly morning mass and hoping the after-school snack-of-the-day program would be peanut butter and jelly sandwiches. As a child, I neither felt nor understood the social issues surrounding such a setting. I enjoyed my time in school and the education they gave me, even though I live with Catholic guilt now. Looking back on those years, however, I realize that not being tampered with for my identity at such a young age is a great privilege that few children of color experience.

Since the school was on the verge of closing due to lack of funds, each class had only one designated class and teacher. From Kindergarten to Grade 3, the same 20 of us traveled down the hall to the next classroom from year to year. While writing this article, I started to think about the many students in my class over the years, and I remember the few students of color vividly. I have never felt prejudiced or oppressed because of my skin color, and I know that many other students of color cannot comprehend the lack of identity awareness that I have experienced.

After talking to my sister in St. Pat’s, however, I began to understand the privilege of not having to realize that you are different from white people. The most important developmental period of his life was marked by bullying, racism and trauma, while for me that same period was marked by joy and naivety. When I first asked her if she had ever been oppressed because she was Mexican in school, her immediate response was, “I was called a gorilla because of my arms. kindergarten. So yes. ”After that, I started to reassess these interactions more generally. What experiences force people of color at a young age to realize that their identities are different or otherwise? Whenever I am asked about my stay in St. Pat’s, I honestly only think about the good times. Whether it’s because I haven’t been to school as long as my sister, or simply because I don’t remember any instances of racism. , I wanted to know what had made my identity consciousness resurface much later than his.

My sister’s name is Yesenia (but she will always be Senia for me). Pronounced Yes-sen-yuh, meaning floral, derived from Jessenia, a palm tree native to Latin America. Her name is culturally and beautifully unique, but difficult for some people to pronounce. She and I carry her name with pride. It’s different and unusual, which our mom and dad made sure of by naming their first three children Yesenia, Hugo and Marcos. Each of us had these experiences to prepare in the moments leading up to participation, but the nuisance from people mispronouncing my name was minimal compared to theirs. My name is pronounced Hue-go, which sounds simple to me but can be difficult for others. The classic case of mispronunciation has been Hoo-go, but even that is fixed with a simple correction. Marcos is constantly referred to as “Marcus”, “Marco” and sometimes simply “Mark”. For Yesenia, the constant slaughter of her name has left her accepting whatever people call her. Whether her name is “Jessica”, “Jessenia”, “Yessica”, “Yousenia” or just “Yes”, she quickly gave up correcting people – her first realization that she was not like them. others at school.

Even though we all lived in the same house, I never thought that the food, music and traditions of my family made me a “person of color”, someone from a different culture, someone different. For much of my childhood, my siblings and I lived with our grandmother. If you can imagine a classic Mexican grandma, this is my mom. The rock of many Mexican families is the grandmother. Ma is like many other extremely loving older Mexican women in my life – constantly smiling, always dressed in elaborate holiday clothing and jewelry, and persistent in feeding you despite your lack of hunger. She is a small woman, always loving, who loves to cook and provide for her grandchildren. Every time I came home from school, she would wait at the door, arms wide open to give me a hug. As my siblings and I arrived at the dining room table, we began our homework surrounded by plants, family photos, and many religious knick-knacks. While making our worksheets for elementary school, the smell coming from the next kitchen would leave us salivating and ready to eat whatever delicious meal Ma prepares, often with the El Milagro tortillas.

My siblings and I would bring Ma’s food for lunch. Her amazing cooking, especially the tortillas, caused my sister to be told constantly that her clothes smelled bad – and as a result, so did she. I was never teased because my clothes smelled different from other students’ clothes. Although the white students thought she “smelled bad,” they seemed to enjoy the meals she would bring for lunch, as whenever there was a class party or potluck, the teachers and staff suggested that she brings a “special dish” to share. All these micro-attacks and acts of racism subjected her, like many other children of color, to isolation and ostracism from her peers. As a result of such experiences, she blocked the trauma of her childhood and focused her interactions with an understanding community among peers who shared her ethnic identity. Moving on to public school with a large Latinx population, she was able to find a group of friends and peers who understood her and were proud of her Mexican identity.

The first memory I have of the realization of my identity dates back to September 16. I don’t remember the exact year, but it was in elementary school, between 2005 and 2010. My path to identity awareness has been bumpy. Realizing that I was Mexican was above all a celebration, rather than a shocking awareness of otherness, which is the norm for many children of color.

September 16 is Mexico’s Independence Day. This Party marks Mexico’s declaration of independence from Spain in 1810. This day is always a great celebration, a celebration that brings me enthusiasm and pride for my culture. Since my city has a large Mexican population, a few days before the 16th the city starts to fill with Mexican flags attached to cars, waving in the sky. Every year there is a big parade on the east side of town. Everyone is dressed in green, white and red, standing by the side of the road like food trucks, taquerias and paleteros walk up and down the streets. I’ve always loved seeing floats proudly adorned with the Mexican flag, lowriders blasting music from corridos, and politicians throwing candy everywhere. I have vivid memories of growing up next to my very Mexican dad (a tattooed modelo fanatic who always tries to fix anything that’s broken), my siblings, and hundreds of other proud Mexicans celebrating our vacation. – a very different experience than on the playground. At times like this, I realized that I was unique.

My sister’s racial awareness shouldn’t have surfaced in such a jarring fashion. Adopting and loving your skin tone is something every kid deserves to experience. As future parents, educators, or adults surrounded by children, we need to make sure that we are raising the next generation with a love for all of our different identities – whether through conversations about race with young children, implementing racial awareness programs or simply interacting with people. who do not identify with our same identity groups. Young children should be proud of their wonderfully special and unique characteristics without having to deal with isolation and embarrassment. My sister and I have had very different journeys with identity realization and I am proud that we have each other to share many more years of embracing.

***Seven. October 15-15 is the month dedicated to appreciating and recognizing the contributions and impact of Latinxes in America. To celebrate Latinx Heritage Month with us, Multiethnic Student Affairs is hosting an abundance of events celebrate our cultures.

MiC columnist Hugo Quintana can be contacted at hugoq@umich.edu.