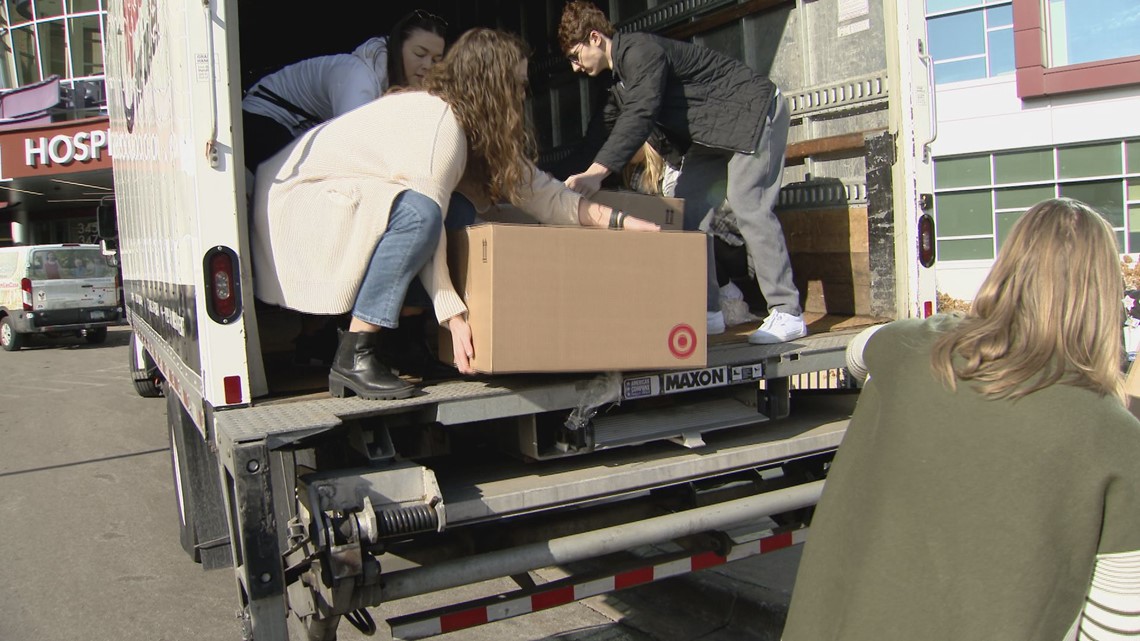 Vanessa Miller’s family delivered 58 boxes of toys and games, along with two pallets of blankets and stuffed animals, for the children in her care home.

ST PAUL, Minnesota – It was Christmas in March on the St. Paul and Minneapolis Children’s Hospital campuses on Tuesday as a truck rolled by with toys and gifts for young patients in memory of a special young girl whose mission was to spread joy everywhere She went.

Vanessa Miller died last week aged 12, after battling medical issues stemming from her birth with hydrocephalus, a condition in which excess fluid builds up in the brain. She has been a regular patient at The Children’s over the years, with surgeries and treatments that have left her family grateful and eager to give back.

But Vanessa’s true love… was Target. She and her mother Debra Miller visited the Blaine store at least twice a week (four times in a ‘good’ week) where the little girl was greeted by name and was known to sip oat milk from a mug Starbucks.

It was this love that led to a major shopping spree last Saturday, where hundreds of people turned out to buy gifts for children being treated at Children’s Hospital. The event was healing for the Millers, their extended family and their wider community, as it promised to spread the joy and enthusiasm for which Vanessa was known.

On Tuesday, family members and volunteers accompanied a van truck loaded with 58 large boxes full of gifts and two stacked pallets of colorful blankets and stuffed animals to Children’s St. Paul. Half of the loot would be deposited there, with the other half then transported to the Minneapolis campus.

“Just to make their stay a little more comfortable, to provide a distraction, just to give back because Vanessa has spent a lot of time in the hospital, and we have received so much from The Children’s and everyone who has been so generous to make a gift,” Vanessa’s mom, Debra, said. “It means a lot, because…Vanessa was always just a joy, she was so generous and so caring, and she loved people, she loved other kids, she spread joy.”

“Everyone who talks about her talks about this joy,” added Vanessa’s aunt, Mary Strohmayer. “So we want to keep going, Vanessa is spreading the joy even after she’s gone…she IS the joy.”

In fact, as they unwrapped and sorted through gifts from last Saturday’s crazy shopping spree, the Millers discussed making it an annual event to keep young patients front and center at The Children’s. There will also be an effort to build a new playground at Kids Abilities in Hugo, where Vanessa received therapy.

“She’s just mad she missed the party,” Strohmayer said as she and Debra Miller laughed. “I had serious FOMO, I didn’t want to miss anything.

While Vanessa’s impact on the world will last far longer than her 12 years on earth, that fact does not erase the sadness and pain that lingers in those who love her. The life of a child with special needs thrives on routine, and Vanessa’s mother struggles with an aching heart…and a hole in her life.

“I miss her very much,” Debra Miller said. “My day revolved around her schedule, whether she wanted to go to the park, go to Target, eat fries at Wendy’s…we did everything together. It was getting up in the morning, rushing to my door and saying “Bien Bonjour!” to whatever she wanted for dinner, saying good night.”