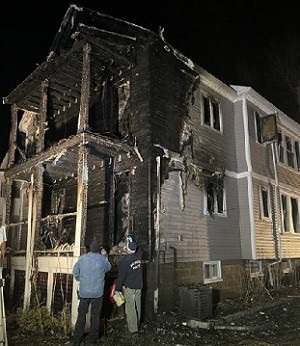 The 2.5-story home at 10 White St. sustained $600,000 in damage, according to a report submitted by Deputy Fire Chief Ryan Melly.

The fire left at least seven people homeless at the time – the upstairs family of Marco Fanzoni; his wife, Patricia Kabitzke (who was traveling in Costa Rica at the time of the fire); and two daughters, as well as three residents downstairs, Zach Bloom, Lauren Jaeger and Julian Feshbach.

Unit E1, including Lt. Kevin Burns and firefighters Devin Murray and Brandon Stratton, were first on the scene, the report said. E1 identified the location of the fire as the back porch by the sound of two fire alarms going off. During the night, units C1, C2, E2, E3, L1 and R1 arrive on the scene. However, both levels of the house suffered significant damage.

The fire started from the ground floor of the back porch. The fire department report said this was the site where Feshbach smoked about 20 to 30 minutes before reporting the fire. Feshbach attempted to extinguish the cigarette on a piece of cardboard or plastic, according to the report. But a spark remained, and it led to the fire that engulfed the White Street house that February night.

Assessed value of the house

City records show 10 White St. had an assessed value of $1,103,100 in fiscal year 2022, the latest figure. The house is owned by David Serabian of Oakland Avenue, Arlington.

The official department report includes the results of an arson investigation assisted by Lt. Brian Gallagher.

Battled amid high winds and 22-degree temperatures, the fire started on a back side porch, according to the report. Its point of origin was at ground level where the foundation meets the lower porch, a lattice-covered storage area under the porches.

A visual “V” pattern had burned through the trellis extending upward to the vinyl siding and vinyl-covered posts and railings, the report said.

The investigator ruled out electricity or cooking/grilling as the cause. The report says Lt. Gallagher interviewed Feshbach, Floor 1, “who said he was smoking a Mariguana cigarette approx. 20-30 min. before the fire. He said he tried to put it on a piece of cardboard or plastic and then returned inside.

Deputy John Kelly said Feshbach told him he called 911 and thought the fire started with a spark.

This part of the report concludes: “The fire was accidental. Careless disposal of smoking materials.

Meanwhile, fundraising continued for the displaced:

Become Irish again, for a day at least

Green Returns to Game Action in Warriors Win Over Wizards